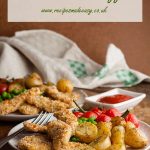 These oven-baked sesame seed chicken nuggets with mini roast potatoes make a delicious midweek meal and are a much healthier variation on the popular fast food takeaway.  They will be enjoyed by young and old alike. 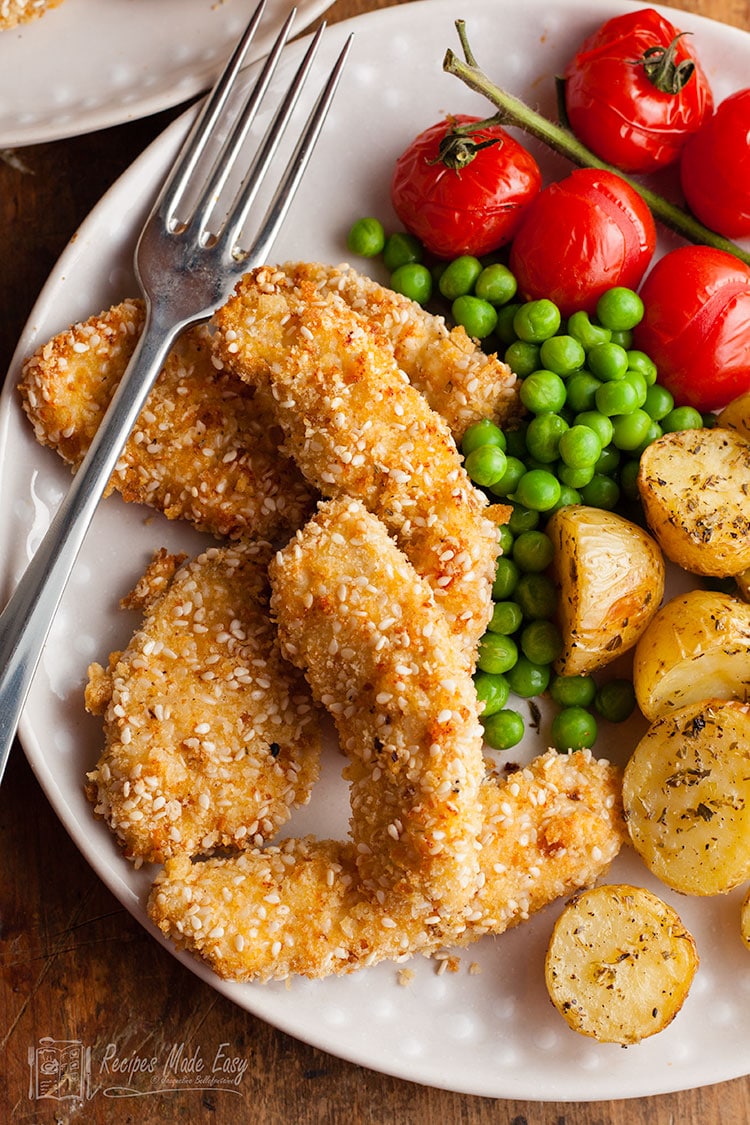 Like many families, we probably eat more chicken than any other meat. If I had started writing Recipes Made Easy when my boys were little there is no doubt that this recipe would be one of the first I shared with you.  We had it for supper so often and surprisingly we never tired of it.

It’s a much healthier version of that perennial favourite so adored by young people: chicken nuggets and chips. It was one of those family meals that suited everyone. We all liked it, especially the boys. It was easy to make, so great for midweek meals, and was nutritious too.

Being oven baked the sesame chicken nuggets are much lower in fat than traditionally fried chicken nuggets. They are drizzled with just a little extra virgin olive oil which, bring high in antioxidants, is arguably good for you.

The sesame seeds add flavour as well as fibre and essential fatty acids.  The chips are replaced with small potatoes cut in half and tossed in just a little oil, plus some herbs for extra flavour. They are roasted in the oven alongside the chicken.  A few cherry tomatoes roasted alongside, and a handful of peas or green beans, and you have a well-balanced family meal that everyone will enjoy.

I will be honest. We don’t have it quite as often as we did when the boys were young. Their taste buds have developed and now they enjoy a huge variety of foods as do we. So when they are at home they want to eat a much greater variety of dishes, and usually something hot and spicy!  But even now it still makes a great meal for us every now and then and I have kind of missed it,  so it will be back on the menu again soon.

If you need more idea for chicken dishes to serve to your family, here are more of our favourites which you may like to try:

Or type chicken into the Search box for more ideas

Cut the potatoes in half

Toss with the oil, herbs and seasoning.

Tip out onto a baking tray and cook for 30 minutes.

Cut the chicken into strips across the grain.

Combine the breadcrumbs and sesame seeds in a shallow bowl.

Season the flour with salt and pepper.

Coat the chicken strips in the flour.

Dip in the beaten egg.

Coat in the breadcrumb mixture.

Lay in a single layer on a lightly oiled baking tray.

Brush the chicken nuggets with oil.

Bake the chicken nuggets under the potatoes until golden. Adding the tomatoes towards the end of cooking.

For the baby roast potatoes and tomatoes

For the chicken nuggets

Nutrition information is calculated using an online nutrition database - is approximate and is meant as a guideline only. (It does not include seasoning with salt and pepper.)