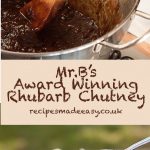 Easy to make, Mr.B’s Award winning Rhubarb Chutney with its delicious sweet & sour tang is a real winner. It’s perfect with a chunk of cheddar, and divine in a ham sandwich. 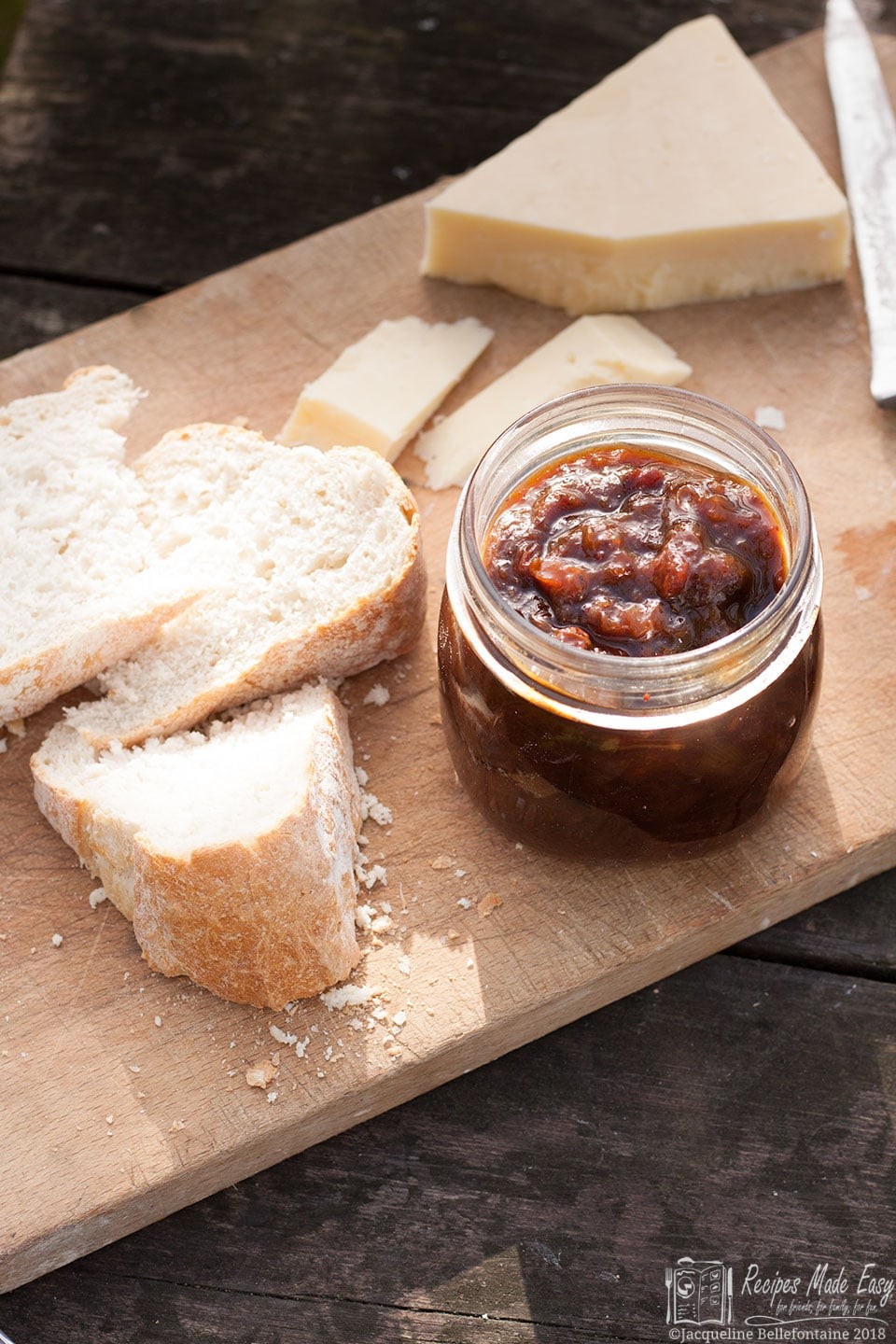 With a rhubarb patch that keeps producing more rhubarb than we can use, Mr B has kept suggesting I should make rhubarb chutney but with one thing and another I never quite got around to it, and he decided to make it himself.

So, one Saturday a few weeks ago, while I was doing some techy stuff on the site with the help of my friend Sabrina, he set about making a batch, armed with an old cook book of mine (The complete book of Home Preserving by Mary Norwak (1978)) and a bunch of rhubarb fresh from the allotment.

Suffice to say, the recipe in the book lacked detailed instructions. As is the case with many cookbooks of that time, the recipe is just a paragraph long, assuming a fair degree of knowledge on the part of the user. I wasn’t paying much attention since Mr B is a competent cook, but after several hours of listening to it bubble away in the background, it occurred to me he had been cooking this chutney a very, very long time without any suggestion it might be ready soon!

It was only when I went to have a look, that I saw the tightly covered pan keeping the liquid from evaporating, and once that was removed, it wasn’t much longer until the chutney thickened enough for jarring up. Despite it’s long cooking time it tasted surprisingly good.

Fast forward a week  or two to our horticultural society annual produce show. I saw a category for homemade chutney and decided (unbeknownst to him) to enter a jar of his forever cooked rhubarb chutney. It won first Prize! The judges even asked me for the recipe. It being that good, I decided to retest with my own timings and, rather tongue in cheek, call it Mr.B’s Award Winning Rhubarb Chutney.

I’ve rewritten the recipe with a few more details but it still remains a short and easy recipe to make. I cooked the second batch last weekend up at our cottage and this time cooked it uncovered.  It took about 1 hour in all to make and still tasted as good as Mr B’s. At least I think so and he agreed, although perhaps he wouldn’t dare say otherwise ;). Turns out the long cooking time is not required to get the award winning flavour.

Its a great recipe for using up the last of this seasons rhubarb. No young very tender stems required here and unlike many chutneys which need to be allowed to mature for a few weeks this one tastes really good right from the moment it went out of the pot.

The chutney is a great addition to a Ploughman’s lunch or a cheese sandwich. We love it with cold meat and chips if you make me it do let me know what you like to serve it with.

It also makes a great gift for your foodie friends.

How Long will Rhubarb Chutney Keep

Mr.B’s award-winning chutney will keep for at least a year in an unopened jar. Store in a cool place away from direct light. Once open store in the refrigerator for up to 6 weeks.

Store in a cool dark place. The chutney should keep for up to 1 year.

Place all the ingredients in a large saucepan.

Cook gently until the sugar has dissolved.

Boil gently until the chutney has thickened.

More Jams and Preserves Made Easy

Click on the mages to take you to the recipe. You will also find more rhubarb recipes made easy just type rhubarb into the search tab in the menu bar.

I’m linking this recipe to