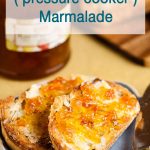 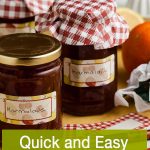 Homemade marmalade is delicious but making it the traditional way can be a bit time consuming and fiddly. Is there really such a thing as quick and easy marmalade?

Well if you have a food processor then yes this certainly makes the preparation easier and quicker too.

Add a pressure cooker into the equation and you can dramatically reduce the cooking time too. So this method makes it about as easy and as quick as it can be.

Preparing the peel for marmalade

Unless you like shredless marmalade (personally I cant see the point of marmalade without delicious bits of peel in it) then shredding the peel is what seems to take the most time when making marmalade traditionally.

First, you have to cut the fruit in half, then squeeze out the juice. Next you scoop out the remaining flesh, pith and seeds (set that side you will need that later). Then cut the pieces in half again before cutting the peel into thin strips.

Even if you like chunky bits of peel as I do, it can still be a little time consuming. It is also essential to have a sharp knife. I once made some at a friends house and let’s just say her knives left a bit to be desired. Boy, it was hard work!

For this quick and easy marmalade, I simply cut the quartered orange peel pieces in a food processor. Do this in two batches and use the pulse button as you don’t want to reduce the peel down to a paste.

Once you have chopped the peel simply add to the pan along with the juice and continue as you would before.

You could argue it doesn’t look as pretty as hand-shredded peel but I think it looks just fine and it tastes just as good!

Once the peel is prepared it needs to be cooked until very soft. This usually takes about 2 hours.

In a pressure cooker, it takes just 12 minutes at pressure. That’s a dramatic time saving!

I don’t have a pressure cooker and a food processor!

So if you have both a pressure cookery and a food processor, yes I think this really makes it a quick and easy marmalade.

If you don’t have a pressure cooker you can still save time by chopping the fruit in a food processor and then using a conventional recipe (the recipe quantities are different when making in a pressure cooker). See my post How to Make Marmalade for the recipe.

If you don’t have a food processor but do have a pressure cooker then follow this recipe shredding the peel by hand.

How to make quick and easy marmalade step by step

Read my how-to post for tips on how to sterilise jars and test for set.

Once open refrigerate and use within 3 months.Nutrition information is approximate and is meant as a guideline only.