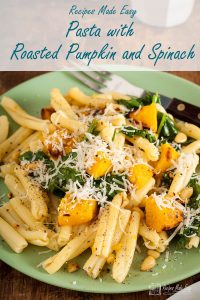 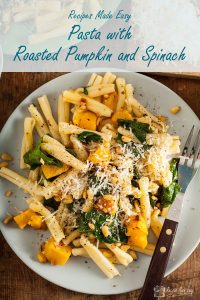 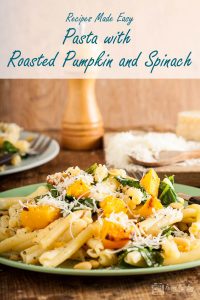 Easy to prepare pasta with roasted pumpkin and spinach is a healthy hot and spicy dish. Perfect for a midweek meat-free meal.

Hands up if pasta is a staple in your house. As I thought, almost everyone has pasta as a go-to dish for after work meals, but there’s no need to get into a rut of serving the same old pasta dish. It’s a wonderfully versatile food and there are lots of delicious quick and easy meals to be had.

We always have a stock of homemade bolognese sauce which I cook in batches and store ready in the freezer for a quick spag bol. It’s delicious but it can feel a bit ordinary if it’s served too often.

I once wrote a book of 100 pasta recipes (no longer in print) but in researching it, it really opened my eyes to how versatile pasta is and how just one or two simple ingredients could transform something plain into a mouth watering dish.

This recipe is adapted from one of the recipes in the book. Perfect for autumn when pumpkin and squashes are at their most plentiful and best. At other times of the year butternut squash can be used.

A word of warning though, try to avoid using the big pumpkins grown for carving as these have little flavour – if I carve out a pumpkin I tend to use the flesh for Pumpkin Soup.

With this simple pasta dish you really want the pumpkin flavour to shine through and it is perfectly complimented with the garlic, pine nuts and chilli. You could leave it at that but I think the spinach just adds some extra colour, flavour and nutrition to the dish.

To peel the pumpkin before roasting or not

Pumpkin can be difficult to peel so often I roast the pumpkin with the skin on. Then the skin will peel away easily.

But for this dish that would mean fiddling around with the pumpkin at the same time as the pasta is cooking and you are cooking the pinenuts. Not impossible especially if you have someone to help in the kitchen but it does involve a bit of multi-tasking.

So I decided it was best to get the preparation of the pumpkin out of the way first, especially as my pumpkin had a relatively soft peel. It just needs a very sharp knife.

If your pumpkin is very hard to peel or you don’t have a suitable knife then cook the pumpkin in larger wedges, the timing is much the same unless they are very thick. Peel and chop into smaller pieces before adding to the pasta.

Step by step Pasta with roasted pumpkin and spinach

Pasta with Roasted Pumpkin and Spinach

Nutrition information is calculated using an online nutrition database – is approximate and is meant as a guideline only. (It does not include seasoning with salt and pepper.)