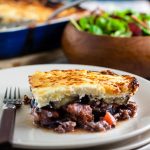 This easy moussaka makes a great midweek meal. Similar to a lasagne but lighter and with no white sauce to make. The aubergines are baked so it is lower in calories than a traditional Moussaka too.

This time of the year seems the perfect time to serve moussaka. Summer is just around the corner (hopefully) but it’s still not warm enough to live on salad and cold dishes alone.

Similar to a lasagne,  yet not quite so heavy, tucking into moussaka with some salad on the side does at least help you to envisage summer days. In fact on a warm night, you might even be able to imagine you are dining on a Greek island. OK that might be stretching it but one can dream…….

So forgetting the fantasy, moussaka still makes a fabulous meal, which is good enough to share with friends.  While it tastes delicious on the day it is made, it is even better when reheated the following day when the flavours have had time to develop.

So it a good meal to make at the weekend when you have a bit more time and reheat on Monday evening – not that it takes that long to make anyway.  I also find it a great midweek meal now that there is often just the two of us as we can eat half the day its made and the rest the following day.

An update on an old favourite

For this recipe, I have taken an old recipe of mine based on a  greek original which I’ve gradually updated over the last few times I’ve cooked it.

Originally the aubergine was sautéed rather than baked but I have found this can soak up a lot of oil and that can really up the number of calories in the dish.

I also used to add potatoes because they were cheaper than aubergines but I think it is much nicer without them and it’s also quicker as these would need to be parboiled.

I have also up’ed the amount of wine I added as it think it adds to the flavour but if you don’t want to add wine then just add water instead.  And these days I like to add some ground allspice and cinnamon into the meat mixture as it helps enhance the flavour.

I suspect my Greek friends might not now recognise this dish as being very authentic but its still a favourite in our household.

Nutrition information is calculated using an online nutrition database – is approximate and is meant as a guideline only. (It does not include seasoning with salt and pepper.)While delicious served immediately the flavour of moussaka improves if you cool and reheat it the following day.
Freeze for up to 6 months. Defrost fully before reheating.