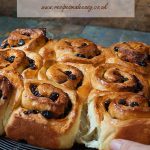 A delicious enriched yeast dough rolled with a filling of sugar and dried fruits these Traditional Chelsea Buns are heavenly served warm from the oven. They are also pretty darn good the next day served for breakfast with coffee.

Regulars to the blog will know that I like to bake along to the Great British Bake Off on television, so when a recent episode had the contestants making Chelsea Buns for their signature bake on bread week, I knew instantly that I would be making them for the blog, regardless of their other tasks.

A good Chelsea bun is a thing of beauty and I had been meaning to share a recipe for them on the blog for a while but had not got round to it.

Buns and sweet yeasted breads are probably my favourite kind of bake and while you can easily buy them in the shops they seldom live up to expectations unless you make them yourself or buy them from a quality bakery.

On bake off, of course, there were all kinds of variations as each contestant tried to outshine the other and for a moment I thought about how I would make the recipe my own variation.

I was toying with the idea of adding chopped apple, I even got as far as chopping one up but in the end, I decided the traditional classic Chelsea bun is actually hard to beat and so decided against it.  J

ane Grigson declared in English Food that the Chelsea bun is “the best of all buns, on account of their melting buttery sweetness.” I think that’s about right but by all means, add your own twist to the filling or dough if you wish.

A lot of recipes finish the buns with icing but it is not traditional. Sometimes they are sprinkled with sugar (I seem to recall my dad’s were sprinkled with nibbed sugar) but I think that is rather gilding the lily and just is not necessary.

Traditionally they would have been brushed with a simple sugar glaze, I have instead opted for brushing the tops whilst still warm with a little honey instead. It saves making a glaze and this is Recipes Made Easy after all!

A Brief History of The Chelsea Bun

The buns were made famous during the eighteenth century at the Chelsea Bun House, situated on the Chelsea Pimlico borders on a street no longer in existence.

Long queues would form outside the shop of people waiting to buy these prized and very popular buns.  There’s a Bunhouse Place which runs between Passmore Street and Bourne Street and, close to the remains of the old Ranelagh Gardens, which is believed to be the exact location.

For a more detailed history of the Chelsea buns read this post by The Londonist.

Chelsea buns are best eaten fresh but will store in an airtight container for up to 3 days.   Freeze for up to 1 month.Nutrition information is approximate and is meant as a guideline only.

If you liked the recipe above, please consider rating the recipe and leaving a comment below, I love to hear how you get on making it too!