These crostini are topped with a delicious marinated red pepper mixture and can be served as a snack, starter or with pre-dinner drinks. The flavours remind me of summer, but you can serve them any time of the year. To be honest, they are probably best in summer since both peppers and tomatoes seem more flavourful in the summer. That said, their bright red colour looks fabulous as part of a festive spread, and they still taste good at other times of the year.

I like to add a little crushed garlic to the oil before brushing it onto these crostini for extra flavour, although this is optional. Grilling the peppers and skinning them increases their sweetness and intensifies their flavour, so even though it is a bit more work, I would not be tempted to miss out this step. However, if you really don’t want to bother, just use some diced marinated peppers from a jar instead. Because the topping is quite moist, I would advise not to complete them until the last minute in order to retain maximum crispness of the crostini. 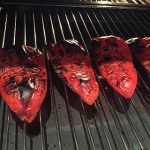 Peel off and discard the skin.

Seed and dice the tomatoes.

Add to the bowl with the peppers.

Top the crostini just before serving.