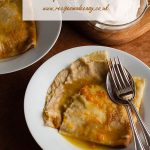 Could this classic French dessert be the ultimate pancake dish? Crêpes Suzette consists of thin pancakes cooked in a rich orange flavoured sauce which traditionally flambéd at the table. 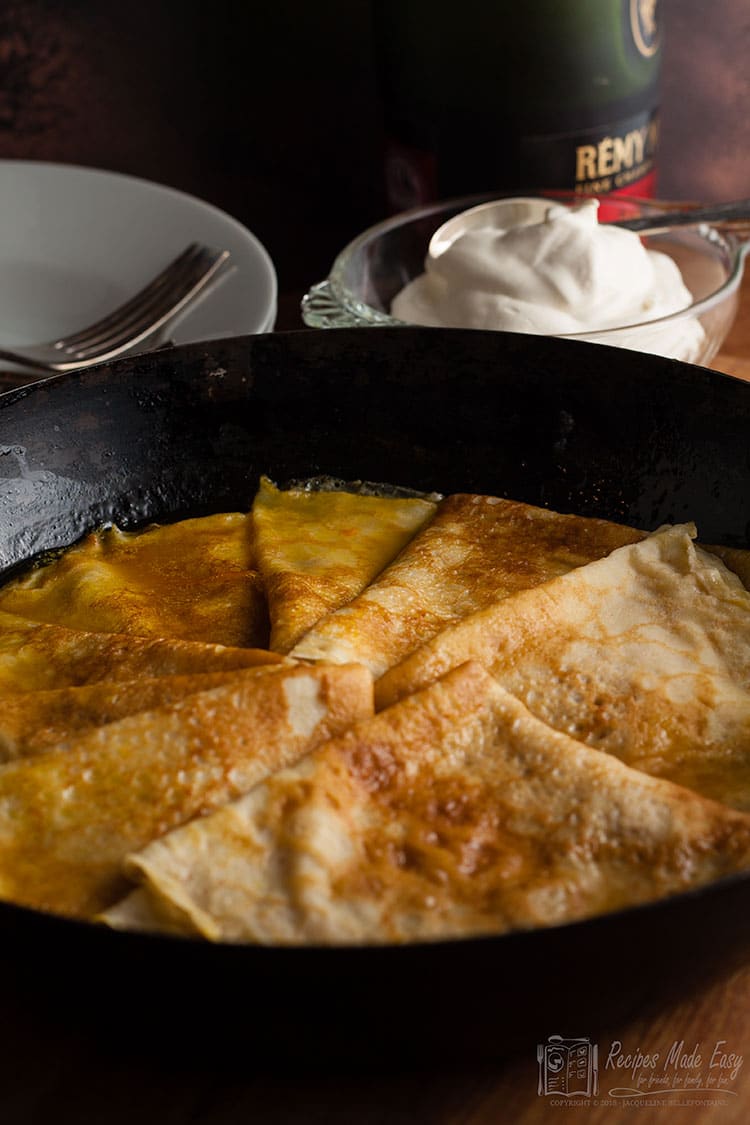 I will confess that one of my favourite ways of eating pancakes is with lemon juice and sugar. But occasionally I like to make more of an effort.  Last year I served them with roasted strawberries. I also sometimes play around with the pancake itself. My Coconut and Banana Pancakes are gluten and dairy free.  But in celebration of Pancake Day this year I am going all retro and serving Crêpes Suzette.

This classic French dish has been a favourite of mine for years but it’s been a while since I made them.  Apparently, they were quite the thing at restaurants in the 70s. The pan of crepes would sit over a small tabletop burner be wheeled in on a trolley and flambéd at the table.

Even if I had been old enough to go to posh restaurants back then, I would have steered clear of any dish that involved a bit of a spectacle. Luckily for me though my dad often made flambéd fruits for a dessert to follow Sunday roast at home.  And just occasionally Crêpes Suzette. They were a real treat. 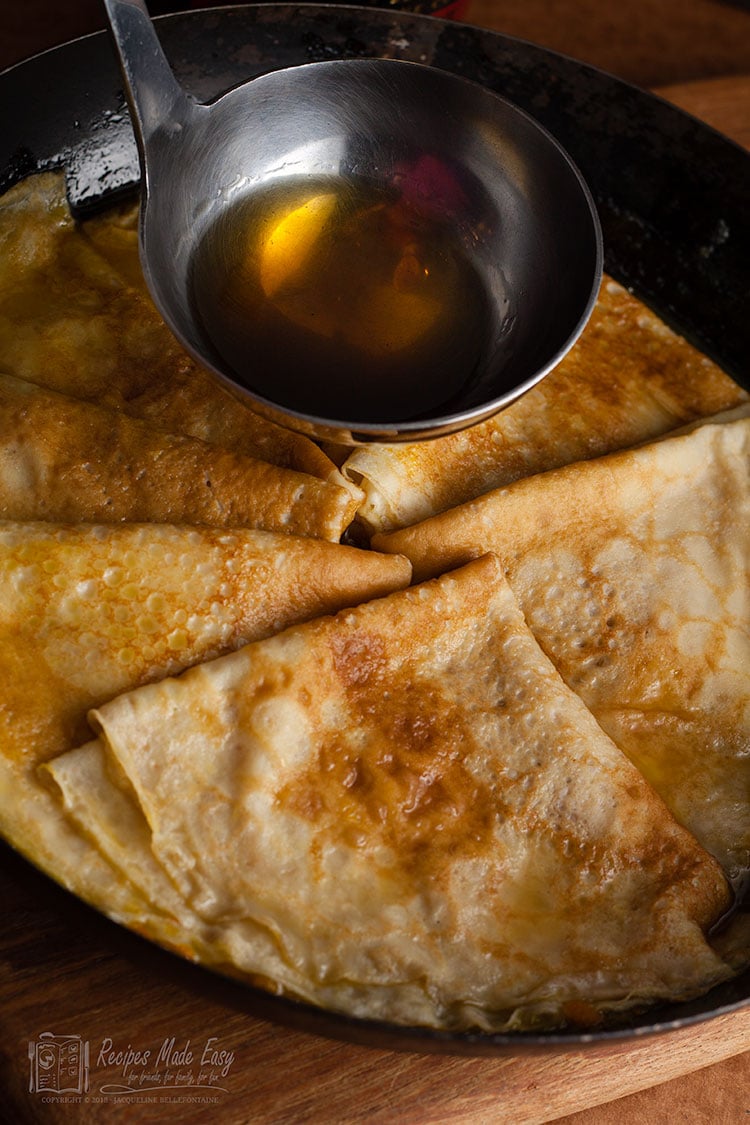 This recipe is based on one I wrote for Woman’s Realm many years ago and I have only made a few minor tweaks. I remember the fun we had in the photographic studio trying the capture the flames for the shot. We must have poured half a tin of lighter fuel on it by the time we had finished.

This time I tried to capture the flames from the brandy again and I managed to get the flames on my phone at the hob for the steps (Just!). But not for the final shot. I did try with a bit of extra brandy,  but when that failed I wasn’t going to waste them, by cheating with lighter fuel. These bad boys were going to be eaten.

When I flambé, I heat the brandy in a ladle directly over the gas flame and then just as it starts to shimmer gently tilt the ladle so that the brandy catches and then pour over the pancakes.  If you have an electric hob you can heat it in a small pan and then set alight with a lighter.

If you are worried about setting the brandy alight it can be added along with the orange liquor. Either way the gently simmering will evaporate the alcohol and leave you with the concentrated flavour, which is what we are after. 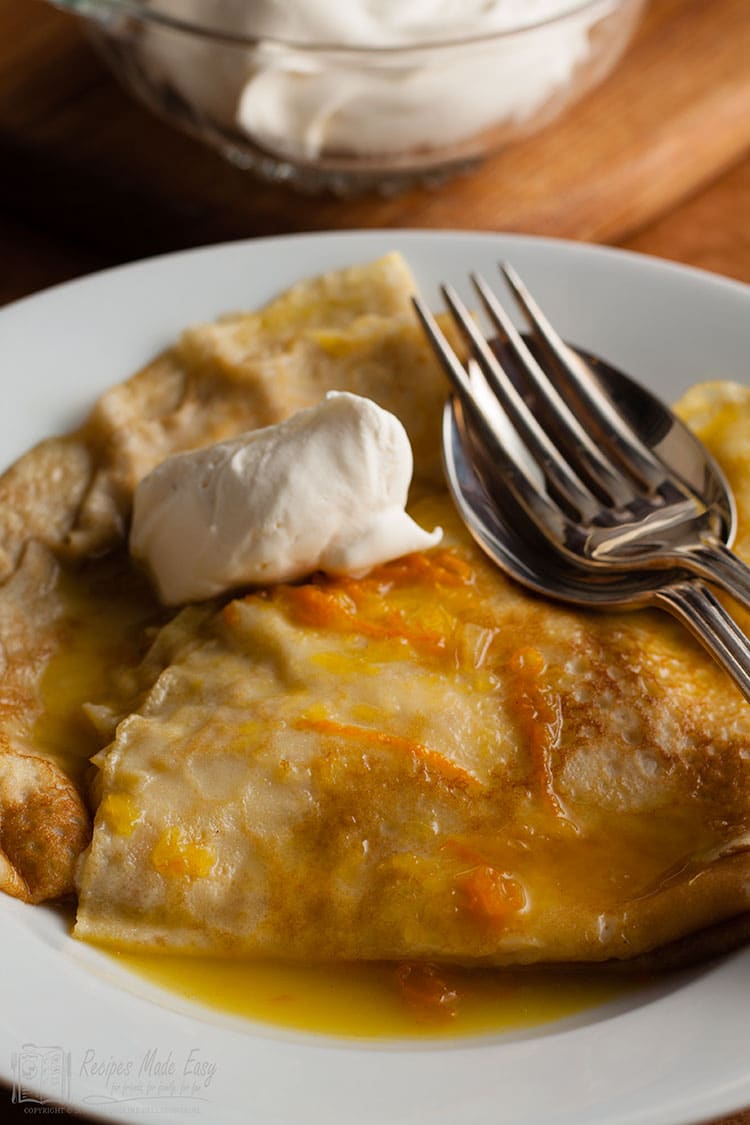 I serve the pancakes with a little lightly whipped double cream or a very good quality vanilla ice cream – Sheer bliss.  Next time you are entertaining or just want a treat why not give them a go. This dish is too good to just be forgotten.  I will leave it up to you whether you do the flambéing for added show at the table or not. I think they taste good enough,  they don’t need the theatrics.

Nigella Suggests in her recipe for Crêpes Suzette, that you can cheat with this recipe and use shop bought pancakes. Generally, I like to cook from scratch whenever possible. Given that they are soaked in a rich boozy sauce which you set light to then perhaps she has a point and it is permissible here. So if needs must then why not.

Nutrition information is calculated using an online nutrition database - is approximate and is meant as a guideline only.

Make the pancakes and prepare the ingredients for the sauce.

I wanted thin strips of zest in this recipe so used a zester to grate the zest from the oranges.

Melt the butter in the pan.

Stir in the sugar and orange zest.

Stir until the sugar dissolves.

Pour in the orange juice.

Fold the pancakes into triangles and add to the pan.

Heat the brandy in a ladle or pan.

Set brandy alight and pour over the pancakes. Serve when the flames have died out.