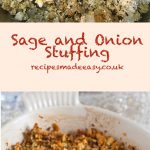 This sage and onion stuffing is really easy to make and goes with pork, chicken and turkey. Despite its name, I prefer to serve this stuffing baked separately, rather than to stuff the meat itself so that you get lots of lovely crispy bits. But it works well both ways so it is really a matter of personal preference.

I know that it may seem like you are sautéing the onions in a lot of butter but don’t be tempted to reduce it as it very much adds to the flavour of the stuffing and stops it from becoming dry. A little oil added to the butter stops the butter burning easily. Cook the onions until they are translucent and just beginning to colour.

One of the great things about this stuffing is that it can be made from ingredients I usually have at home.  I think dried sage works just as well as fresh in this dish. I always have a bag of breadcrumbs in the freezer, as they are so handy. You can use them straight from frozen.  I use white or a mixture of white and wholemeal breadcrumbs.  If you only have wholemeal I would add a couple of tablespoons of water to the mix.

To make your own breadcrumbs remove the crusts from a loaf of bread, cut or tear it into chunks and blitz in a food processor. Freeze until required.

Sometimes I use this stuffing mix to make stuffing balls which I cook around the roast. If you want to do this add enough extra beaten egg to bind the mixture together. They will take about 20-30 minutes to cook through.

The stuffing can be made the day before needed and chill until required. It can be frozen baked or unbaked for up to 1 month.