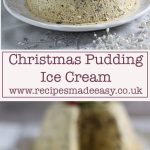 Are you looking for a different dessert to serve on Christmas day. Or do you have some leftover Christmas pudding after the big day? Then this dessert is for you. Rich and creamy with all the sweet Christmassy flavour you associate with Christmas pudding in the form of an ice cream.

Even though in reality I can only eat a very small portion on the day itself. After such a big roast lunch I am usually feeling pretty stuffed, but I will happily eat it on the days that follow.

So I am guessing that’s why  I have never got around to using it in an ice cream. However I do remember a colleague at Woman’s Realm making it many years ago, but I don’t remember what it tasted like.

Maybe I never actually got to try it at the time because if it tasted as good as this one, then I’m sure I would have remembered and made it sooner.

So why now? Well, when I was planning my Christmas posts I was thinking about some recipes that would use up Christmas leftovers and this came to mind.

We always have left over pud, and one of my ideas was making an ice cream with it.  After all the cooking in the lead up to Christmas I am aware that you wouldn’t want to have to spend too much time in the kitchen afterwards.

So I added whisked egg whites to the cooked and flavoured base custard. Egg whites have the effect of coating the ice crystals as they form and  stopping them forming into large ice crystals (churning breaks down large crystals mechanically to produce a smooth ice cream).

It’s a trick I often use when making sorbets. It worked a dream and this ice cream as a lovely smooth texture.

The only down side is that, as this recipe uses raw egg whites, it is not suitable for young children, pregnant women, elderly people or those with weak immune systems.

Thinking about how to present the ice cream I thought it would be fun to serve it looking like a pudding and so I froze it in a pudding basin. Easy to turn out onto a plate once the bowl has been standing in hot water for a few seconds.

I then decorated it with a holly sprig and a few frosted grapes (brush grapes with beaten egg white and dip in caster sugar).

But here’s the thing, when I tasted it,  I decided it tastes so good that it was too good to be consigned to just a recipe for using up left overs.  It is well worth making in its own right for the big day itself. It certainly looks  and tastes the part!

You can serve it on its own, perhaps accompanied with a sweet sherry or sweet dessert wine. As I made this before Christmas, after shooting I served it later, scooped into balls with a  Pears poached in red wine and served it to friends. I can honestly say they loved it.

Notes: Place the bowl in hot water (taking care not to let any get into the ice cream) for a few seconds to loosen the ice cream before turning out. Contains raw egg whites which are not suitable for young children, pregnant woman, elderly people or those with weak immune systems. Nutrition information is approximate and is meant as a guideline only.