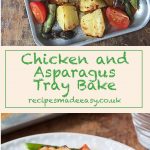 So quick to make, so tasty to eat. This Chicken and Asparagus Tray Bake makes an easy mid-week meal and is on the table in less than 45 minutes!

This Sunday saw the official start of the English Asparagus season,  which traditionally starts on St George’s Day (23rd April) and continues until the summer solstice on 21st June. Judging by the amount of English asparagus already on sale at Borough Market last Saturday I would say it looks like it’s going to be a good one. Which makes me very happy. I love asparagus and they really taste at their best when they’re fresh and local.  Imported asparagus just do not have the same flavour.

Often I just cook them and serve with a knob of butter and a good sprinkling of black pepper. Delish and yes, I eat them with my fingers! They also make a great weekend lunch served topped with a poached egg.  But these are hardly recipes, more serving suggestions. Anyhow, I was so shocked by my negligence to include any asparagus recipes last year that I have spent some time in the kitchen this week making up for it.

My first asparagus recipe to share is this simple Chicken and Asparagus Tray Bake. Asparagus roast well, so I have added it to a simple chicken tray bake. Wrapping the skinless chicken breasts in a couple of rashers of pancetta not only adds flavour, but also stops them drying out while they roast. After roasting the chicken for 20 minutes with the potatoes, the asparagus and tomatoes are added along with a drizzle of balsamic vinegar and a sprig or two of rosemary. The tray bake is then popped back into the oven for 15 minutes until the asparagus are tender and the chicken cooked through. Simple and quick to prepare it makes a great midweek meal for two.

Despite being just a humble tray bake, it is more than good enough to serve when entertaining. I have given quantities for two but it is very easy to multiply up, all you need is a bigger baking tray or two! Incidentally, you may have noticed that my recipes now have a little slider when you hover over the serves tab. Simply slide up or down for more or less servings and it does the work for you, calculating the amounts you need.

I’m linking this recipe up to #CookBlogShare

Previous Post: « How to sterilise jars, test for set, pot and seal jars when making jams and preserves.
Next Post: Foil roasted salmon and asparagus »