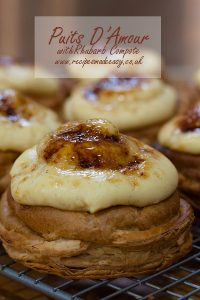 This week for my Bake Off inspired bake I have made Puit’s D’Amour with Rhubarb Compote. These French pastries that translate as “wells of love” are really easy to fall in love with. They may not be the most elegant of bakes but they sure taste good. 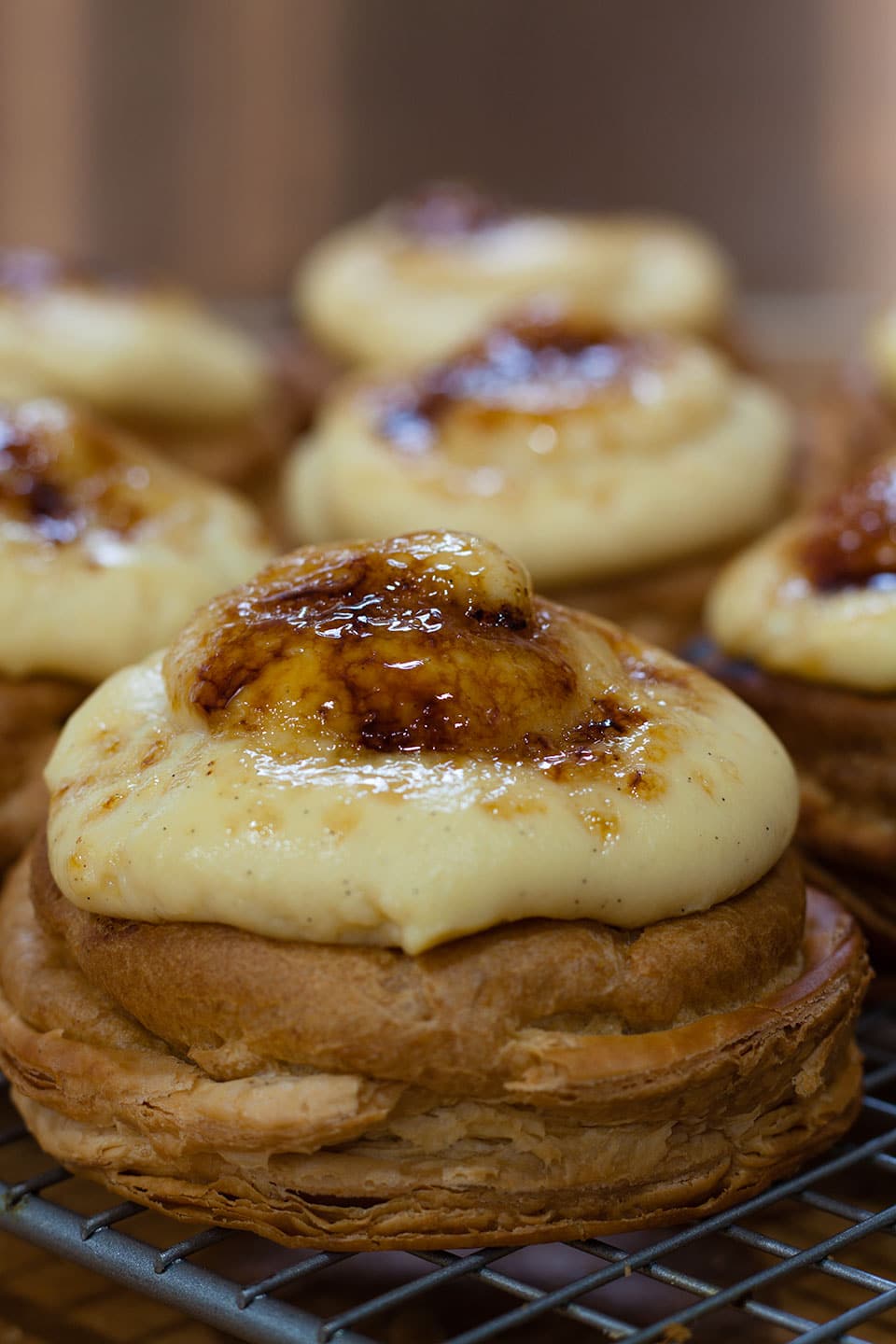 This week on the Great British Bake Off it was pastry week, so when they made puits d’amour for the technical challenge, I knew that was the bake I was going to have to make for Recipes Made Easy.  That was because I had never heard of them before,  let alone made them and I do like to try something new.  But more importantly than that, I thought they sounded delicious and I was not wrong there.  The Puits d’amour consist of a disc of puff pastry with a ring of choux pastry on top, filled with fruit compote and topped with crème pâtissière. Then if that’s not enough the top is sprinkled with sugar and caramelised.  I mean what is there not to love about these! 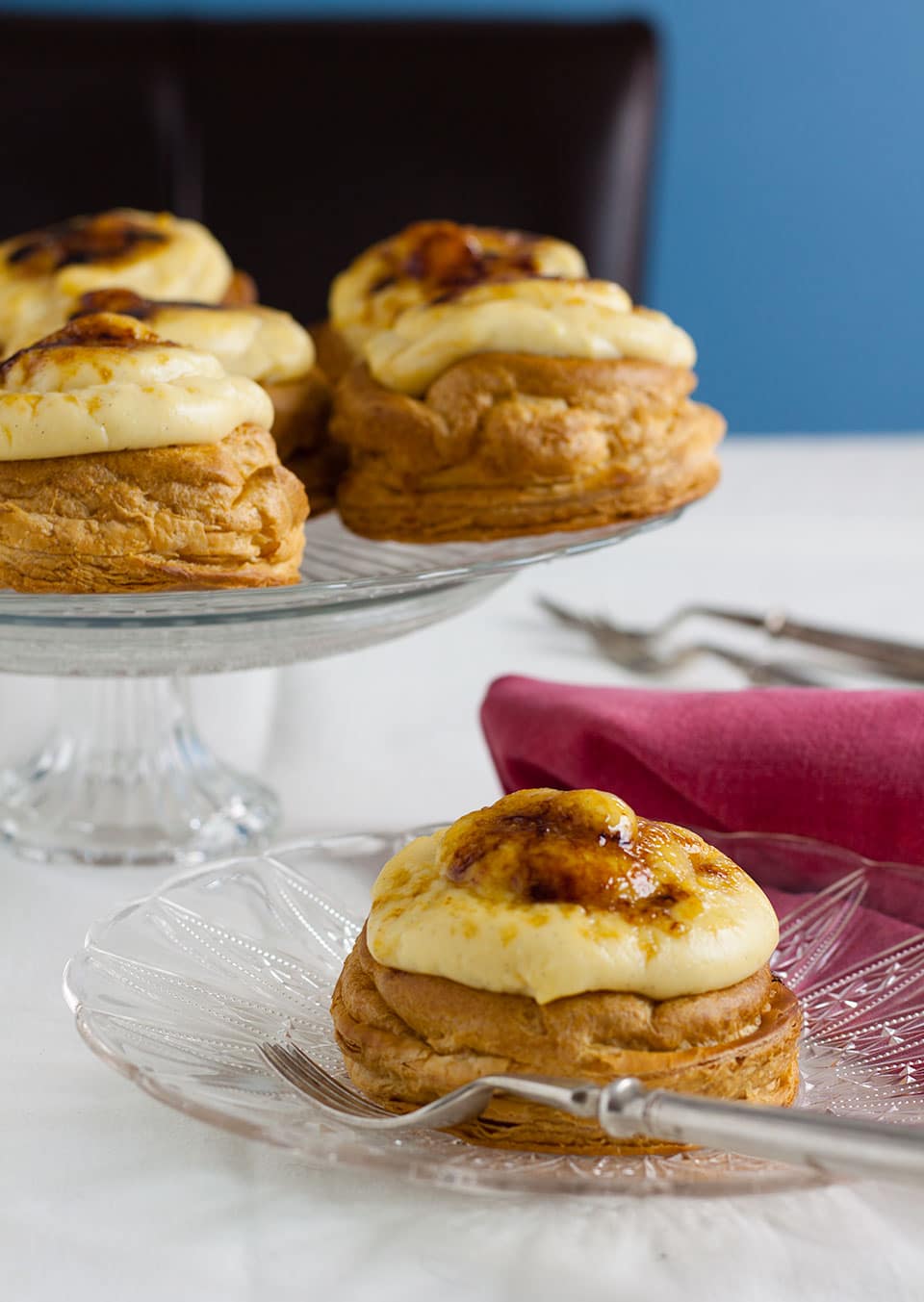 As I have not made them before I based my recipe on Prue’ s Recipe for Puits D’amour. Of course, as I am all about Recipes Made Easy, I have adapted and simplified my version. To start with I have used ready rolled puff pastry rather than making my own ruff puff pastry. Not that ruff puff is that hard to make but there is a lot of folding and chilling which takes time and there are several elements  to this bake and using ready made puff pastry is one shortcut I don’t mind making.  I cut out 9cm (3 1/2 in) rather than 10cm (4in) discs of pastry Prue suggests because that was the largest cutter I have.

No changes were made to the choux pastry but I didn’t bother brushing the ring of choux with egg so my cooked choux pastry is not as shiny, but trust me its hard brushing egg onto soft choux pastry and I don’t think it makes that much difference. I also left off the nibbed sugar because that is hard to get and rather superfluous.

As I had some rhubarb in my fridge that needed using and its a bit late in the year for English strawberries, I made a  rhubarb compote instead of the more traditional berry filling.  The slightly tart rhubarb contrasts well with the sweet crème pâtissière. You could make another shortcut here and just use some jam instead.  I pretty much followed Prue’s recipe for the crème pâtissière but I didn’t bother passing it through a sieve it really isn’t necessary and I prefer to cover mine with parchment to stop a skin forming as it cools rather than cling film.

There are several elements to these French pastries but none are overly difficult and the end result is well worth the time and effort. I don’t think they are the prettiest of French pastries but they make up for that in flavour, the different textures and flavours just work so well together. Once complete they are best eaten as soon as possible as the pastry goes soft and the brulée top loses its crunch. However, you can easily prepare them in advance. I made all the separate elements the day before I assembled them.  Keeping the compote and the crème pâtissière in the fridge and the pastries in an airtight container. I popped them back into the oven for a few minutes to crisp up again, then assembled as soon as they had cooled. This was my first but will not be the last time I will make puits d’amour.

For the crème pâtissière:

To make the crème pâtissière

To make the fruit compote

To make the pastries

Best eaten as soon as possible after assembling.Nutrition information is calculated using an online nutrition database - is approximate and is meant as a guideline only.

Melt the butter in the water, bring to the boil and add the flour all at once.

Beat until the dough leaves the side of the pan and forms a ball around the spoon.

Gradually beat in the eggs.

Pipe the choux pastry in a circle on top of the pastry discs. Bake until golden.

Whisk egg yolks cornflour, sugar and vanilla paste together, then whisk in the hot milk.

return to the pan and cook until thickened.

Whisk the butter, cover then allow to cool before chilling.

Place the rhubarb in a pan with the sugar.

Cook gently until the rhubarb is tender.

Pipe the crème pâtissière in top of the compote.