When it comes to Christmas I’m a bit of a traditionalist. Christmas wouldn’t be Christmas without some baked gammon.  I like mine glazed and this tangy marmalade glazed gammon is my current favourite. I’ve been making it for several years now and my guests love it too. 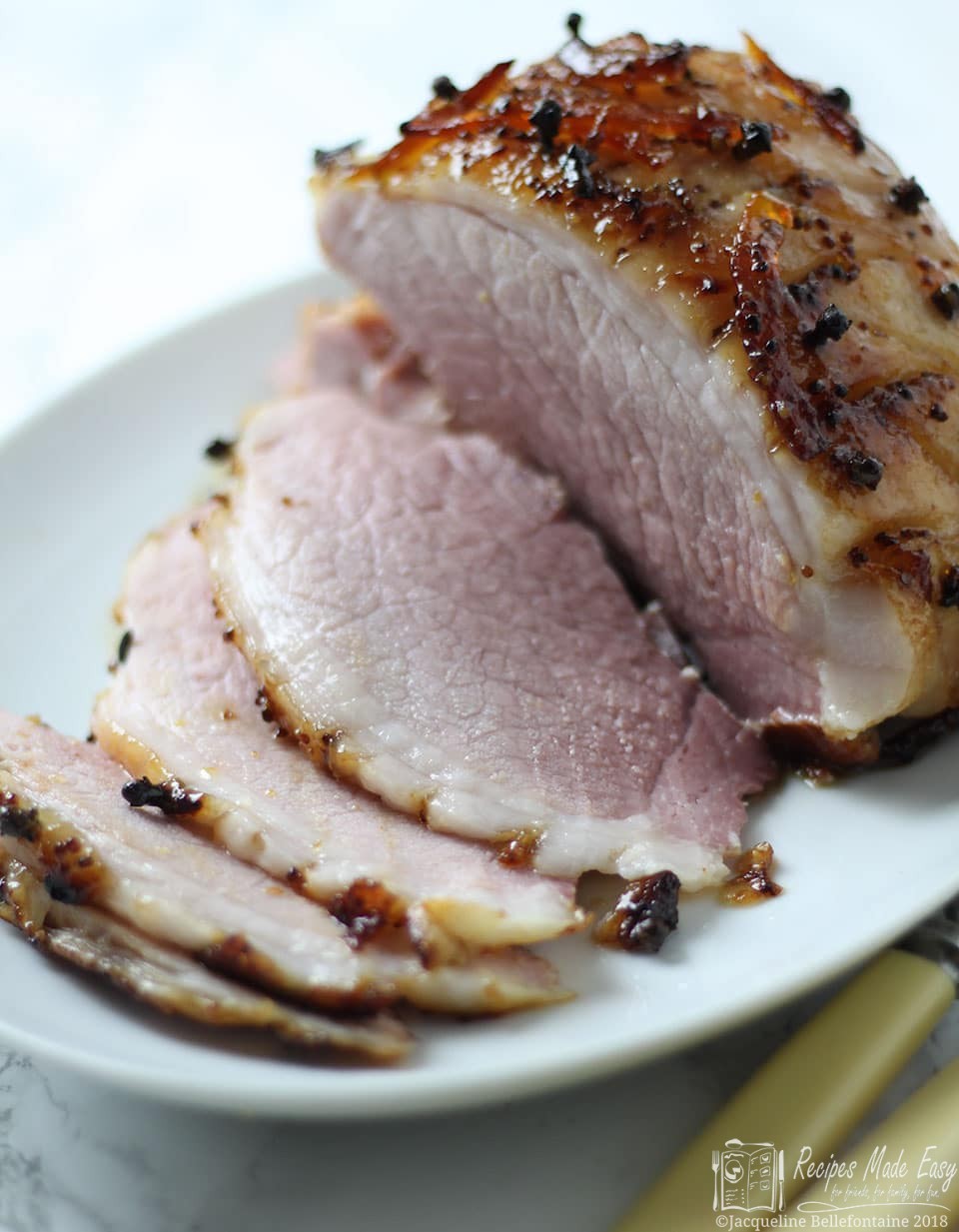 This year our Christmas dinner will consist of Turkey and all the trimmings including Cranberry Sauce. In addition, marmalade glazed gammon, and Christmas Pudding with Brandy Butter or custard. My sister-in-law and her family, as well as a couple of other friends will join us. I am also looking forward to having both my sons with us now that one has returned from a couple of years traveling. I find that a 1.5kg gammon joint is ideal. It’s not too small that it becomes dry on baking, and not too large so that you have too much left over. I think it’s an ideal size for an average family.  Even though there will be about 10 of us for Christmas dinner, there will be plenty of turkey so we will not want too much. 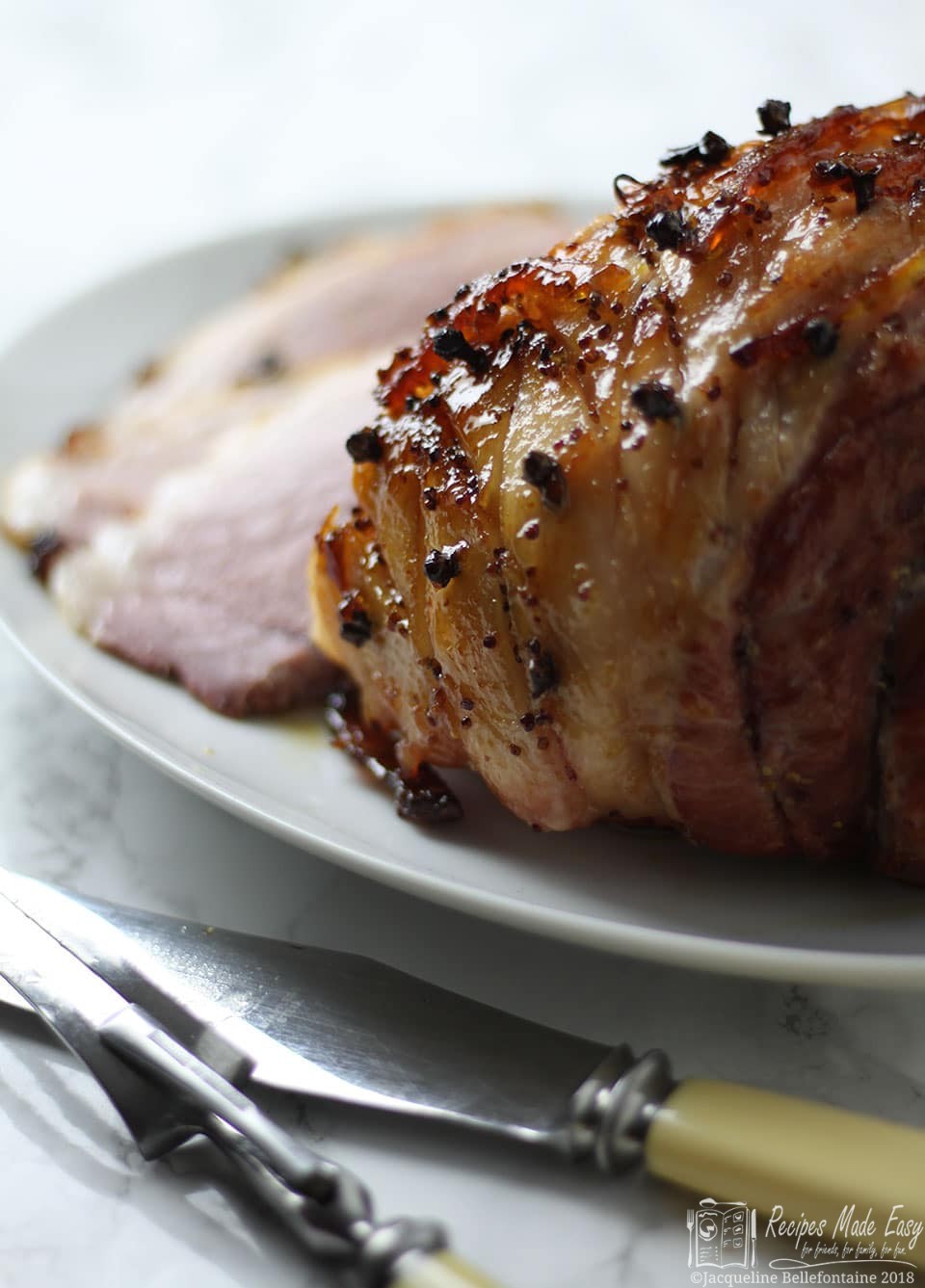 Marmalade Glazed Gammon – A meal for any time of the year

Unlike turkey, which I tend to eat only at Christmas,  marmalade glazed gammon is something that I will eat at any time of the year. It’s delicious served warm from the oven with mashed potatoes and a green vegetable. It is also fabulous served cold with coleslaw (try my winter coleslaw it’s delish) or baked beans and jacket potato. And of course it is divine in a sarnie made with good bread and a dollop of chutney or cranberry sauce.

Over the years I have played around with how I cook my gammon and have settled on this way as my preferred method. Some recipes bake the gammon from beginning to end in the oven which, while ok for small joints, I find has a tendency to produce a rather dry joint. So I part cook my gammon by boiling it with a few aromatics. I make my own cider and so I usually boil the gammon in cider rather than water for added flavour (it also makes a nice stock for a risotto,so doesn’t go to waste). You can use just water, or apple juice and water if you prefer.

After the initial cooking I remove the skin, leaving a layer of fat. The fat is then scored in a diamond pattern and studded with cloves.  I love the additional flavour the cloves give and they have the added advantage that they help stop the shreds of marmalade in the glaze from falling off.

The glaze is very simple to make and is just a mixture of marmalade, a little honey, and some wholegrain mustard. This is then brushed over the gammon which is baked until golden, basting with any glaze that slips of the joint couple of times during cooking. Simple – Delicious!

Allow to rest for about 30 minutes in a warm place if serving hot. Or, if serving cold, allow to cool completely, then chill until requiredNutrition information is approximate and is meant as a guideline only. (It does not include seasoning with salt and pepper.)

Boil the gammon for 1 hour.

Allow to cool slightly then remove the skin, leaving a layer of fat.

Score the fat into a diamond patter and stud with cloves.

Brush with the glaze and bake for 15 minutes.

Baste again with the glaze.

The glaze can burn on the bottom of the tin. It will usually come off easily enough if you soak the tin for a few hours. But why not make it easier on yourself and line the tin with foil, which can be discarded. It certainly makes washing up easier and I am all for easy!

What will you be eating on Christmas day? Do let me know and tag me on Twitter (@jacdotbee), Instragram (@recipesmadeeasyblog), Facebook (@recipesmadeeasy), or hashtag #recipesmadeeasy  if you post pictures of your festive cooking on any of the above. I  would love to see what everyone is making.