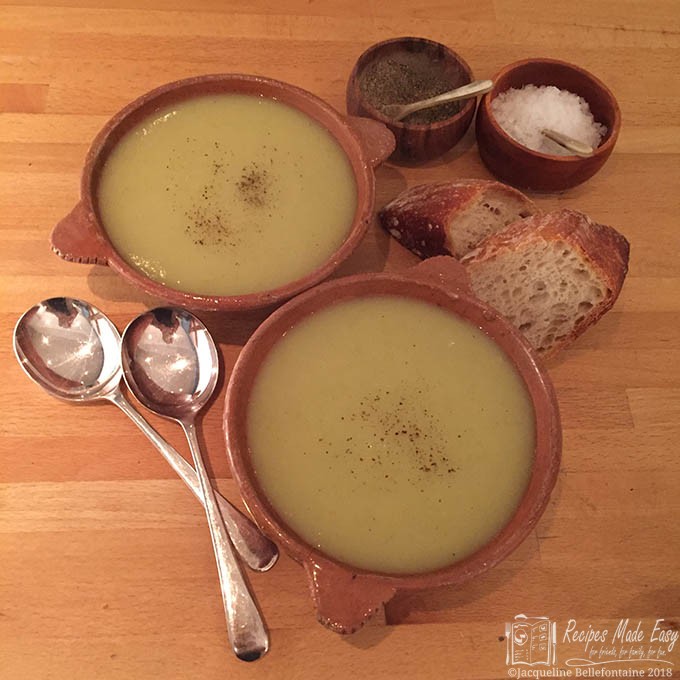 The temperature outside has certainly dropped over the last couple of days and it’s definitely feeling like winter, which makes it a perfect time to serve up a bowl of warming soup.  This recipe for leek and potato soup uses just two main ingredients,  and who would have thought that such humble ingredients could make such a tasty soup?

I love this soup as it is made from vegetables that I often have in the fridge anyway, so I don’t even have to nip out in the cold to the shops to get them, and in a very short time I can have a bowl of soup on the table.  But even if you don’t have leeks and potatoes to hand it is still worth popping out and getting them. You will find this is about the easiest soup to make.

First start by trimming the leeks. Cut off the root end and the dark green  parts, but do include the pale green parts of the leek. Slice and wash the leeks well under running water to remove any dirt. Next peel and cut the potatoes into  even sized pieces.

Sauté the leeks then add the remaining ingredients and cook until tender.

Purée until smooth, check the seasoning and it is ready to eat.

I like to use a stick blender to purée the soup as you can do it in the saucepan, which has the advantage of no waste and keeping the washing up to a minimum, which is always a bonus!  You can pick up a stick blender for just a few pounds and I don’t think the more expensive models are worth the extra money, especially if you are just using them to make soups.   But you can also purée the soup in a food processor or liquidiser, the latter will give you the smoothest result of the three. 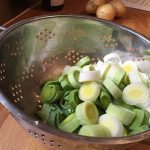 Freeze: for up to 6 months.
Tried This Recipe?I would love to know how you got on – Tag me on Instagram or Twitter @RecipeCrumbs or leave me a comment and rate the recipe below