I have to say I again wasn’t overly inspired with this week’s Bake Off and their Tudor theme. Since I haven’t tried any of the technical challenge bakes yet, I decided to do it this week and baked Jumbles. 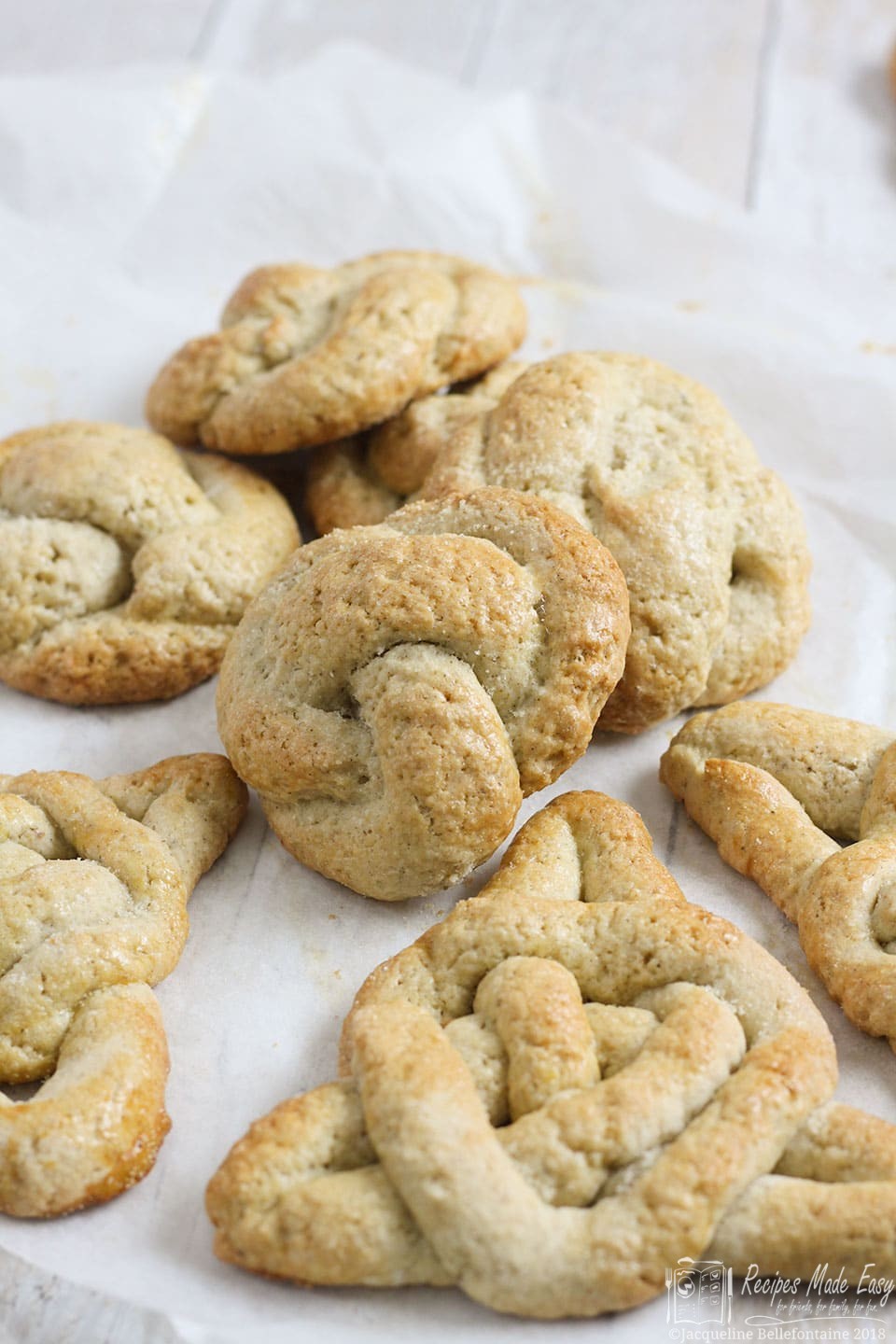 Back in the tent the first task was to make small pies arranged to make a bigger picture. Pies were a big deal in Tudor times so Im told. Although initially a good starting point for a recipe to share on Recipes Made Easy, I already have two fabulous pie recipes coming soon on the blog. Neither of them fits the brief though as they are both large ones.

The final challange was making a marzipan centre piece. Now, I like real marzipan and I have made my own. I shall share some recipes with marzipan in the future but somehow I don’t think a  marzipan dominated cake will appeal much to my readers. If I’m wrong then let me know.

So for this week’s bake, jumbles it was. While not the most inspiring looking technical bake,  I have to say these biscuits are rather good. A little plain and less sweet then modern  biscuits tend to be but rather nice for being so. 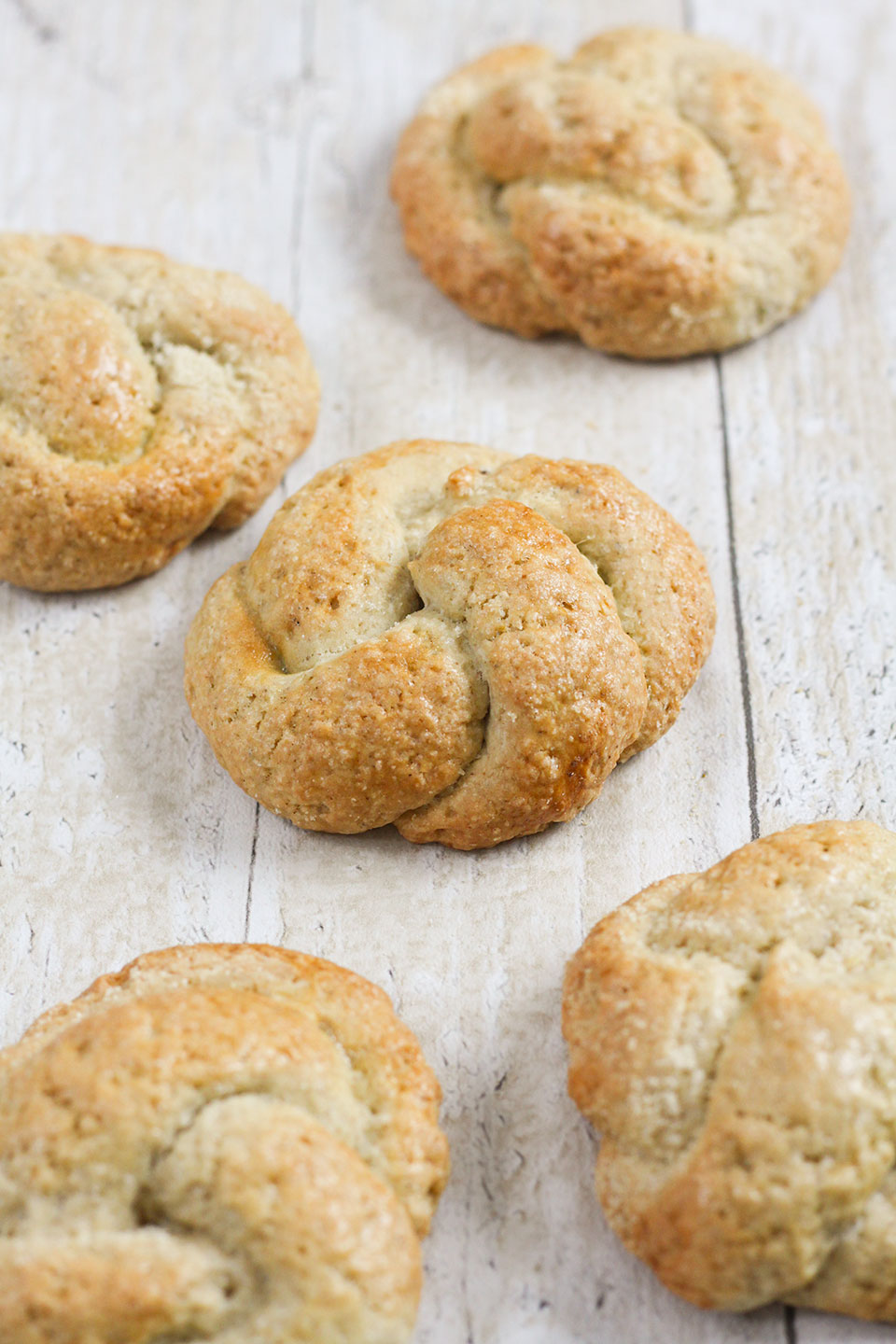 For this bake I used Paul Hollywood recipe published on the  Great British Bake Off web site, which you will find here. I did make a few tweaks though. I have a drawer full of spices and herbs but no aniseeds and only had blade mace so I substituted the aniseed and mace with Chinese five spice. It worked well.

The numbers don’t add up

The method in Paul’s  recipe says “divide the dough in 6 x 65g portions for the double knot biscuits  and 6 x 85g for the Celtic knot biscuits”, and said you may have a little dough over. Having duly weighed out the 6 smaller portions I only had enough dough left to make four of the larger biscuits. I wondered if my scales were not working accurately but then I did the maths. To make those portions I would need 900g of dough. Adding up the ingredients and assuming the eggs are about 50g each (the average size of a medium egg) you have 745g of dough. Someone has got their numbers wrong.

I later found Paul’s recipe published here on the BBC  website. It’s the same recipe but instead it states “Divide the dough into four balls weighing 65g/2½oz and four balls weighing 85g/3oz (you might have a little leftover)”. If you followed this recipe you would have enough dough left over to make another two of the simpler knot biscuits, that’s more than a “little” left over!  For my version of the recipeI have made sure the numbers do add up. 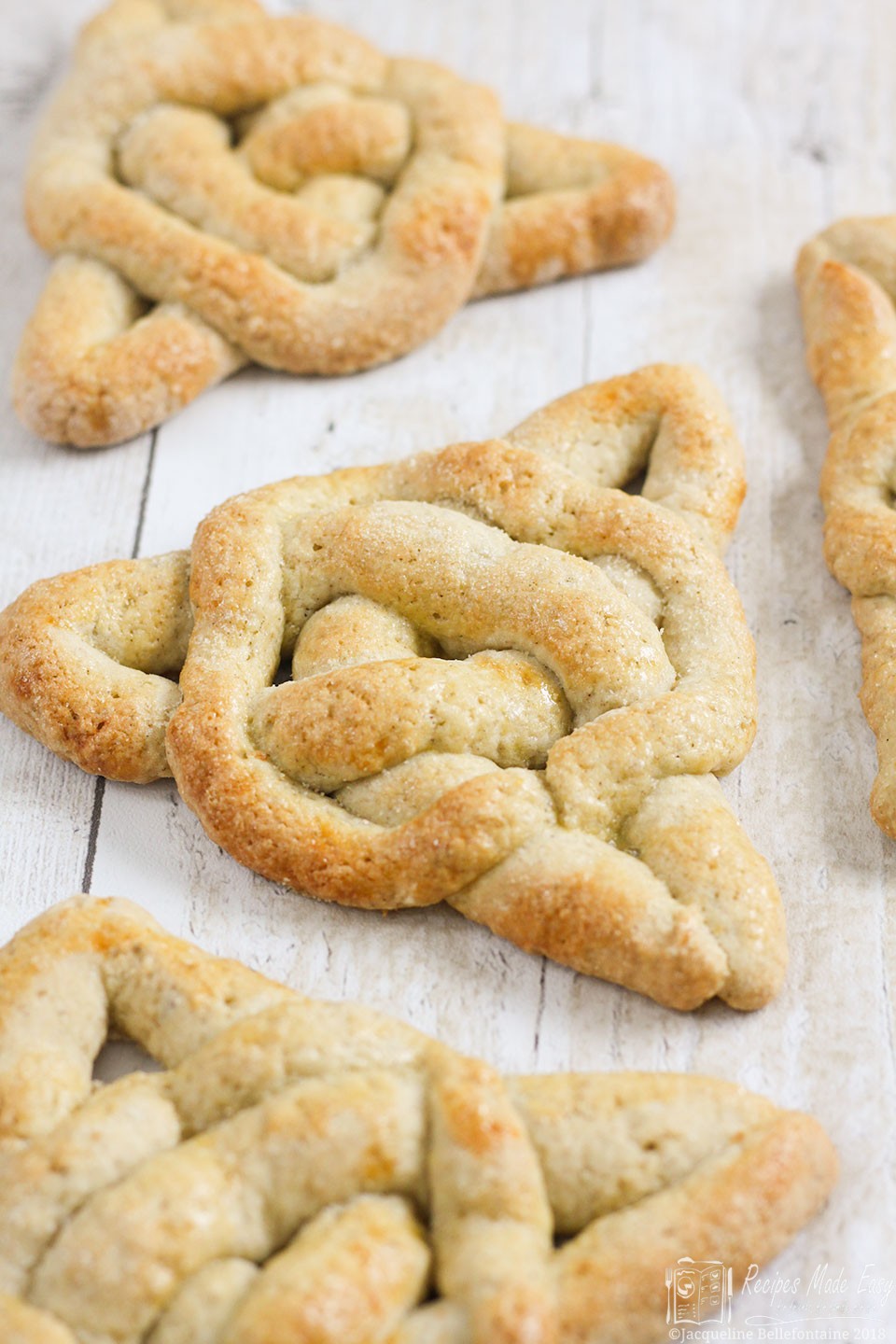 For the technical challange the  bakers on  GBBO  only get basic instructions like “make a dough” and “Bake” with no details on method of making the dough or baking times etc. So following his recipe here is much easier.But, to be honest, when it comes to the shaping Paul’s published full recipe doesn’t say help that much either.

“Knead the 6 pieces of dough (weighing 65g) on a lightly floured surface and roll using your fingertips into a 30cm rope. Knot into double knots.

To be fair it is not easy to explain and I did struggle to get the shapes – particularly the Celtic knot. I have tried to explain in a bit more detail in my method and of course you have the step pictures  which should to help. But to be honest If I were making them again ( and I liked them enough that I  will make them again) I would make different shapes. I did like the proportion of crust to biscuit in the Celtic knots better, so would go for thinner shapes.Perhaps twists, or even simple balls flattened.

Rub the butter in until the mixture resembles fine breadcrumbs.

Make a well in the centre and drop in the eggs.

Beat the eggs together with a fork and begin to work in the flour.

Bring the mixture together with your hands to form a dough.

To form the double knots, roll each piece of dough into a rope and tie a knot.

Tuck one end of the rope underneath the knot.

Tuck the other end into the top pf the knot.

Brush with beaten egg and sprinkle with caster sugar.

To make the Celtic knot, roll one piece into a long rope and shape into 3 points pinching the ends together.

Place on the baking sheet. Roll a smaller rope and shape into a circle and place on top. Brush with egg and sprinkle with caster sugar.

As with all my other Bake Off Post I’m linking with the Great Bloggers Bake Off 2016 hosted by Jenny at Mummy Mishaps. Pop over and take a look at what the other bloggers are posting.