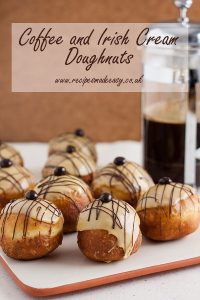 Who can resist a fresh doughnut?  Filled with a custard flavoured with Irish cream liqueur and covered in a coffee icing, a drizzle of chocolate and a chocolate covered coffee bean these Coffee and Irish Cream Doughnuts are a little bit naughty but very very nice. 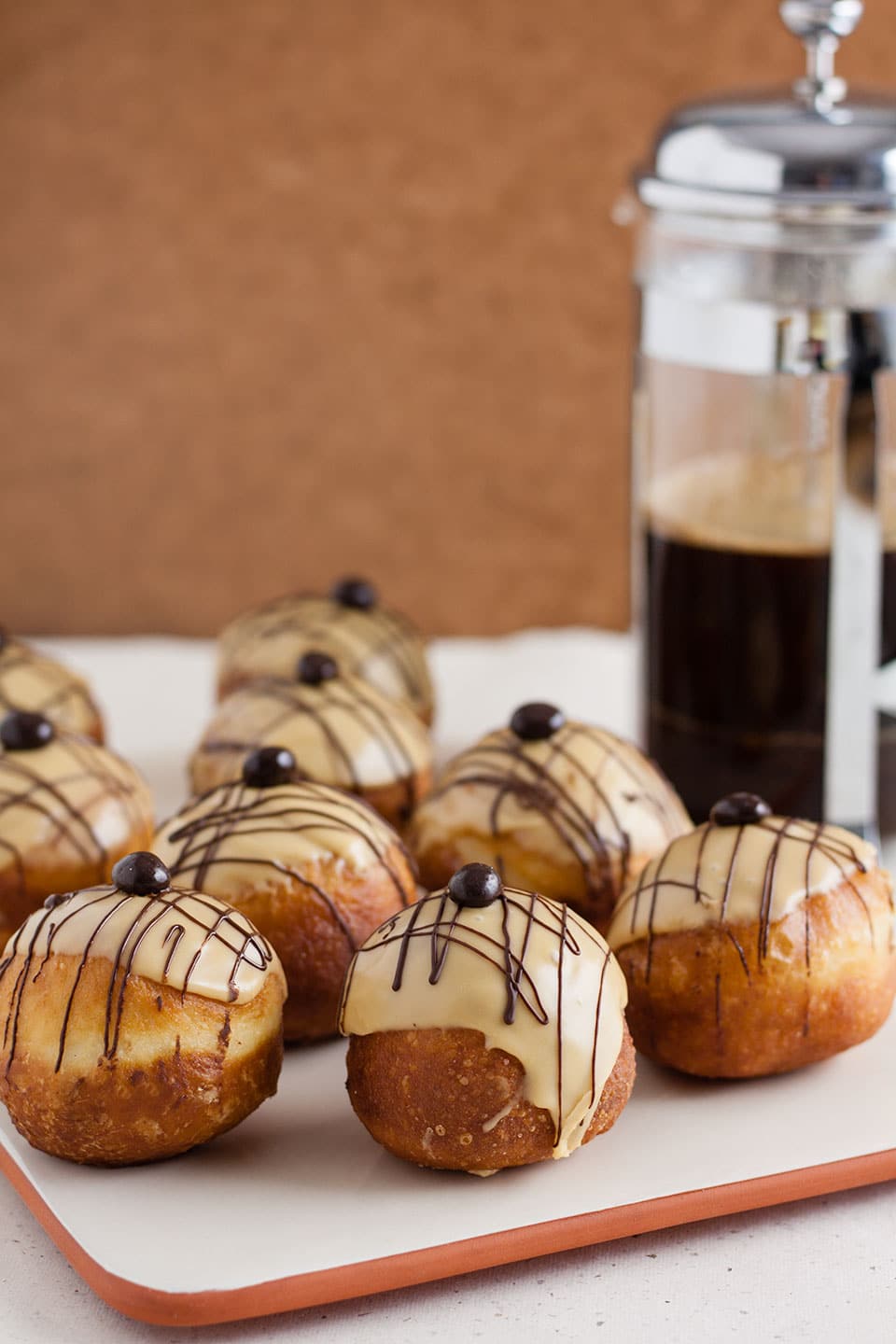 I’m going to confess up front, I think that I am a bit of a jam doughnut fan over some of the fussy flavoured doughnuts you get now.  As a little girl one of my favourite jobs in the family bakery was filling the doughnuts with jam. A treat in the school holidays as they were only made on Tuesday and Thursdays when I was usually at school. A fresh jam doughnut is still one of my favourite treats.

Given how much I love really fresh jam doughnuts, I realise that I should have shared the recipe for them on Recipes Made Easy by now and one day I will.  For now though this post is the last of the 2018 series of recipes inspired by The Great British Bake Off  TV show and something a little more glamorous is required.

The final has been broadcast, the winner decided and its another year before its back on our screens. I have to say I was a tad disappointed with the final this year, come on who bakes pitta bread on a campfire?  So that was one challenge out. The showstopper challenge of a dessert featuring cake, pastry and biscuits in the form of a landscape. Really!! Well, that was not for me either. 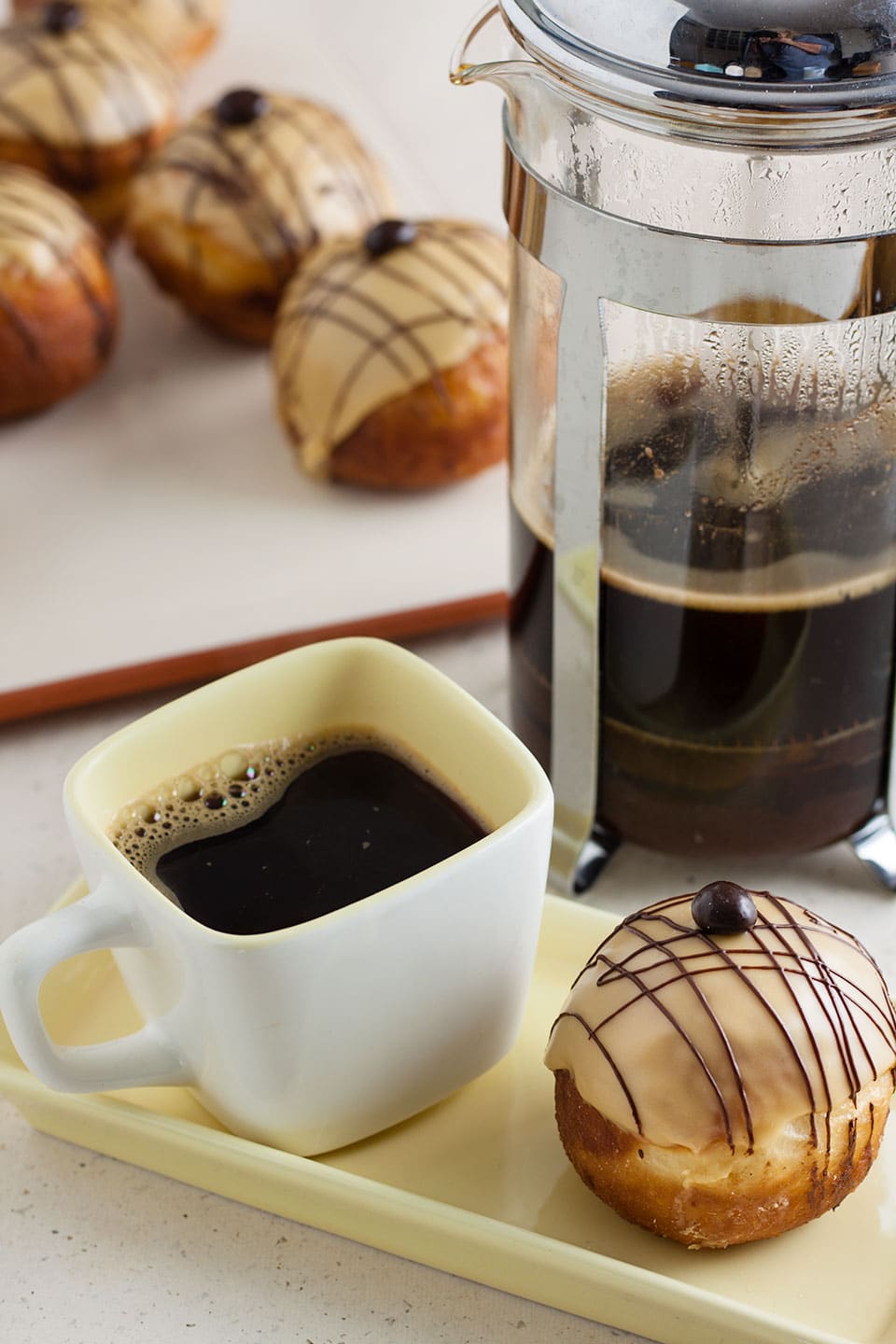 So doughnuts it has to be.  Much as I adore jam doughnuts they were not going to cut it on this occasion, so time to get my thinking cap on and get creative, my challenge to myself was to make a doughnut that could vie for equal place with a traditional jam doughnut in my affections. And I just might have succeeded.

I also like all things coffee so it wasn’t long before the idea of Coffee and Irish Cream Doughnuts was born. Irish Cream liqueur is not one I particularly like to drink but I do like it as a flavouring in bakes and confectionery so the decision was made. The result –  a fancy doughnut that I think is delicious and I really hope you will too. 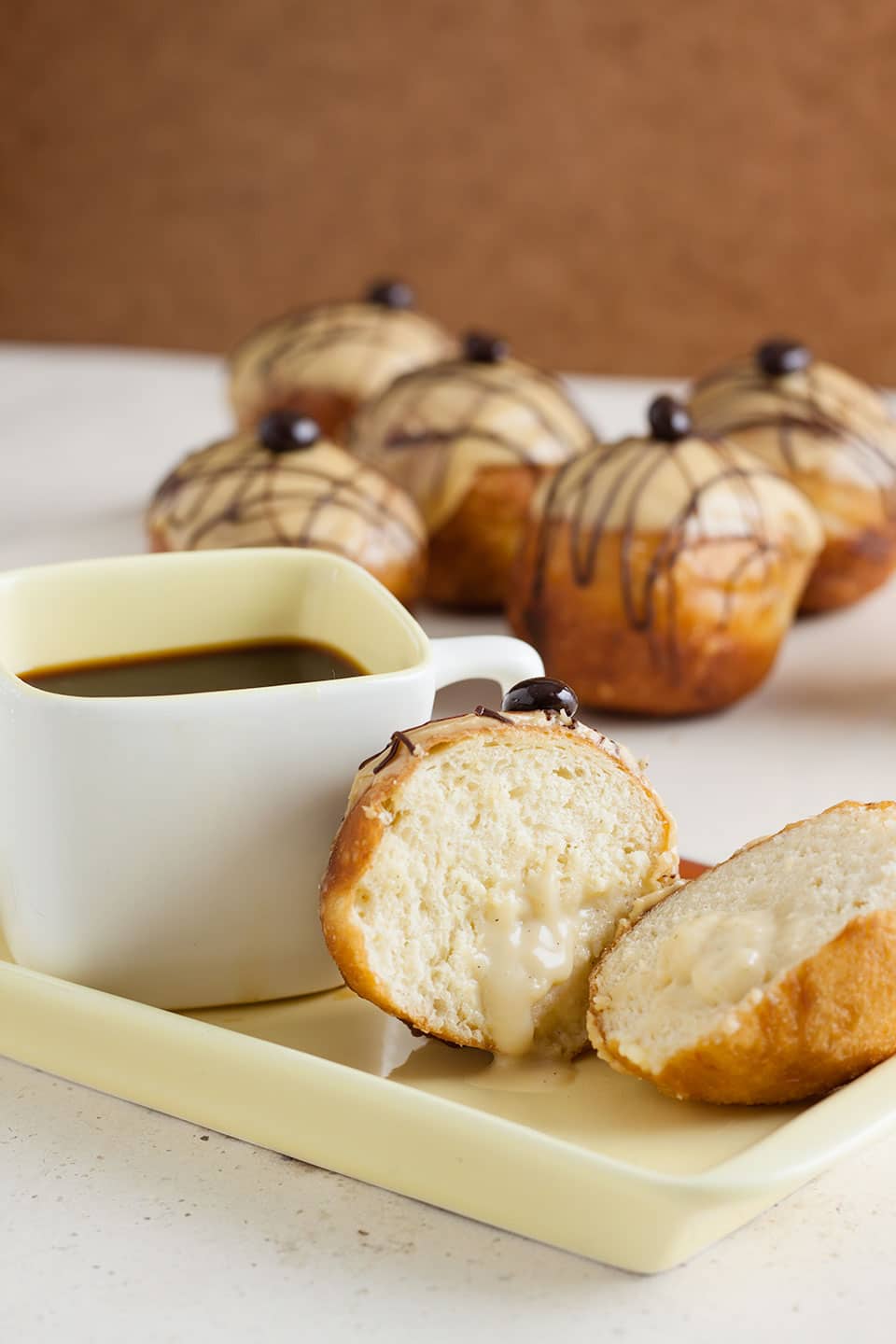 for the Irish cream filling

for the coffee icing

To make the coffee icing

To decorate if desired

CAUTION: Take extreme care when deep frying. Use a deep fat fryer if you have one. If cooking in a pan, never fill more than one-third full with oil and never leave unattended, even for just a moment.
Take care not to drop the doughnuts into the hot oil by lowering them into the oil gently. Nutrition information is calculated using an online nutrition database - is approximate and is meant as a guideline only. (It does not include optional decoration.)

Mix the flour, yeast, sugar and salt in a mixing bowl.

Rub in the butter.

Add the egg and milk.

Mix to a sticky dough.

Knead for about 5 minutes.

Shape into a ball. Cover and leave to rise.

Divide into nine pieces and roll into balls.

Place on a baking sheet, cover and leave to rise again.

Make the filling; mix the cornflour, sugar egg yolk and vanilla extract together.

Whisk in the hot milk.

Return to pan and cook until thickened.

Once cold stir in liqueur.

Mix coffee into icing sugar to form a smooth icing.

Dip doughnuts into the icing.

Decoarte with a drizzle of melted chocolate and a chocolate coated coffee bean.

Filling the doughnut can be a little tricky. If you have difficulty getting the nozzle into the doughnuts use a large skewer to wiggle a hole into it first.  You can nozzle just for filling doughnuts and the like but it is not really necessary just use a smallish plain nozzle (not the tiny writing nozzles).  Alternatively, use a kitchen syringe or turkey baster.

This is the third year I have taken part in the Great Bloggers Bake Off hosted this year at  Mummy Mishaps and Cassa Costello.’ A big thank you to Jenny at Mummy Mishaps for introducing me to it it has been such fun baking along and seeing what other bloggers have made. I think I have only missed a couple of episodes over the three years and have discovered some delicious new bakes along the way.