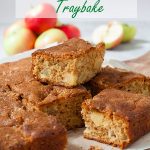 With lots of pieces of apple, this apple and cinnamon traybake is quick and easy to make and packed full of flavour. A perfect everyday treat that is made for sharing. 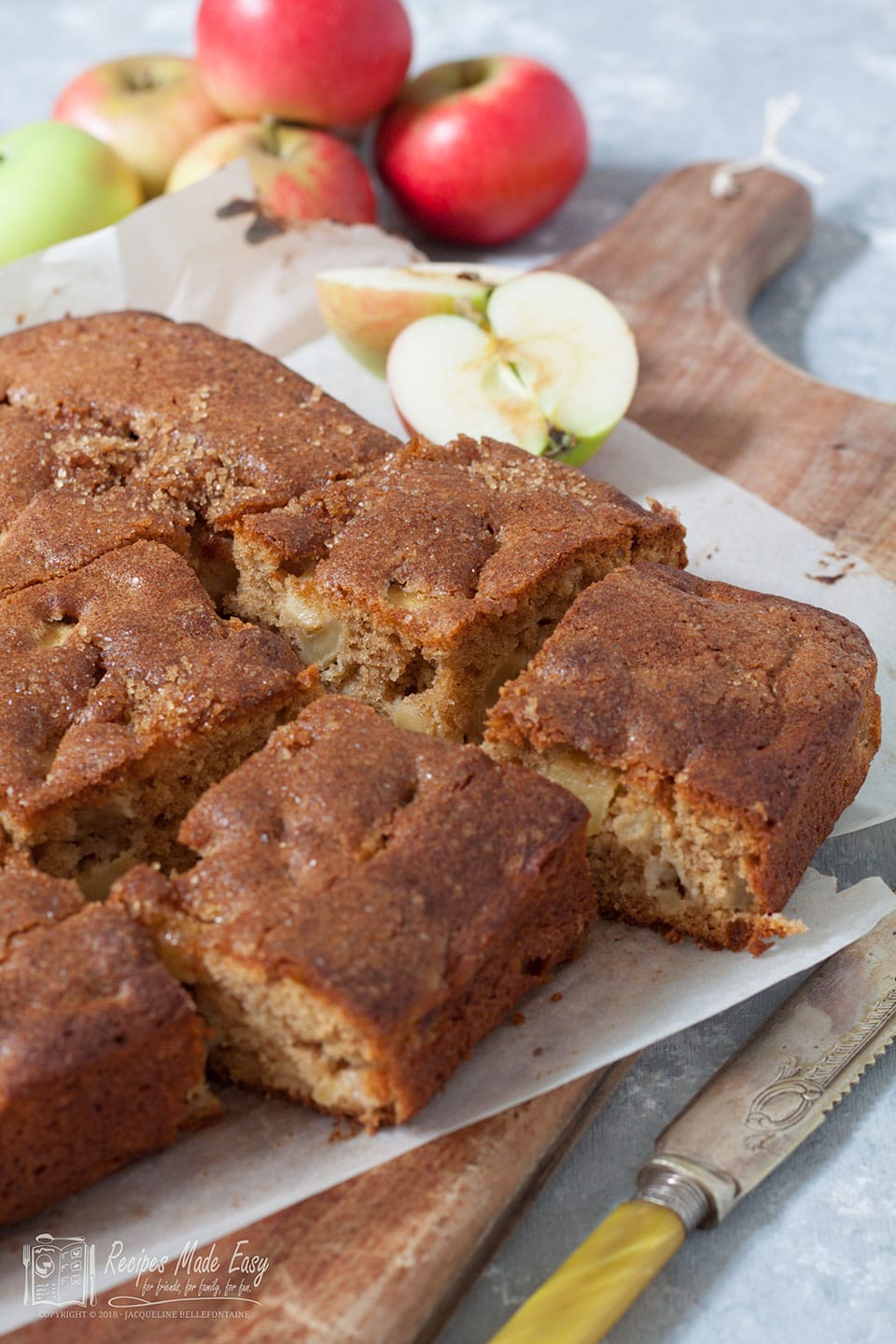 To my mind, the perfect traybake is quick and easy to make and not in the least bit fussy. Sure it can have a simple icing or a little decoration but it should be first and foremost about ease and flavour. The kind of cake you can’t use the excuse you don’t have time to bake because it really doesn’t take that long. Something that is perfect for having with a cup of tea, packing into a lunch box, sending to a school cake sale or simply sharing with family and friends. It is very much my kind of cake. You may notice that there are not many fussy cupcakes on this blog, they have their place but I don’t often make them, simply because they are often too much work for the few seconds it takes to eat them.

At this time of year I start to find myself with a glut of apples, we have three mature trees in our holiday cottage garden and they produce a lot of fruit.  Some we eat fresh from the trees. A lot we juice and freeze for drinking later or turn into cider. But of course, I also like to use them in my cooking. This traybake is one I have made many times. I have also often been asked for the recipe. So when this week’s Bake Off included a traybake I knew it was time to share.

This is my basic recipe and it is a pretty standard creamed cake mixture the same as you would use to make a Victoria sandwich. However in this recipe, I use light muscovado sugar which I think is what makes it so tasty, it has a depth of flavour that caster sugar doesn’t. Then I add a generous spoon of cinnamon and lots of diced apples. I use a small roasting tin about 23 x 27cm (9 x 11in) or a cake tin 20 x 30cm (8 x12 in). I  have sprinkled this one with demerara sugar before baking alternatively you could lightly dust with icing sugar after or leave plain.

As I make this a lot I also tend to vary it so that the family doesn’t get bored with the same old cake – as yet that hasn’t happened!

The cake freezes well for up to 3 months.Nutrition information is approximate and is meant as a guideline only. (It does not include the optional demerara sugar.)

Beat the butter and sugar until light and fluffy.

Beat in the eggs one at a time, beating well after each addition.

Beat in the cinnamon.

Add the apple and fold in.

Add the flour and gently fold in until well combined.

Spoon into prepared tin and level.

Sprinkle with sugar if using.

Bake until risen and golden

Did I mention the tray bake is delicious served warm with custard, cream or ice cream.

If you liked the recipe above, please consider rating the recipe and leaving a comment below!